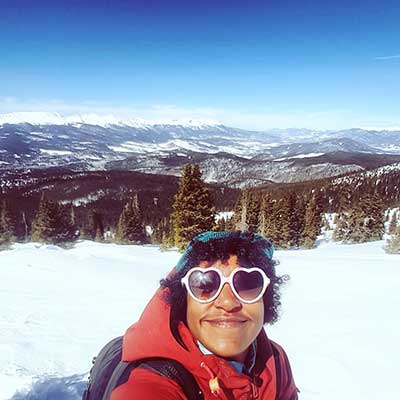 Where are you from?
I’m a good ole southern gal from a little town called Gainesville, Florida. (GO GATORS!) and before you say “Florida’s not the south” let me just let you know that I’m closer to Alabama than I am to south beach, and I have a strong love for sweet tea, and grits are always better than oatmeal.

What brought you to Keystone?
Unlike most Summit County transplants — I never stepped on a pair of skis till the winter after I moved here.  I originally was only supposed to spend 2 short months here working as an actor for  the Lake Dillon Theater Company. My 2 month stint  came to an end, and I was supposed to leave and just decided that I didn’t want to.

What is your favorite coffee drink?
Ooooooh. I would definitely say it depends on the day. I recently have discovered a love for maple spice americanos, which make my mouth water just thinking about them.  I’ve also been known to publicly announce my love for ANYTHING with coconut in it. Coffee drink or non- coffee.

How many shots of espresso per day?
I try to limit myself to less than 5… but really, WHO’S COUNTING. I don’t have a problem. I SWEAR.

Barista experience
Inxpot is actually my first barista-ing job! Can ya tell?

Favorite color
Depends on the day. I’m drawn to bright colors, and have been known to wear almost every color in the rainbow in one single day. Is blue leopard print a color?

Summer or winter
Sometimes I long for winter during the summer, and wish for summer during the winter. But I typically try to embrace all seasons while i’m in them.  I’m also a big fan of fall since I never knew that leaves changed colors till I moved out of Florida.

Activity of choice
Almost anything that involves me being outside. Except fishing– I’m one of those folks with a louder that average volume to my voice which makes  it incredibly difficult to keep fish around me.

Why are you awesome?
Too many reasons! Ha! But if I were to pinpoint one, it would have to be the fact that I have not only 1, but in fact, I have 2! Unicorn onsies! Ready for any adventure that you would take a unicorn onsie on.

Good Morning!! Come warm up by the fireplace and t

We will continue to ensure a safe environment for

Come and enjoy our specials this weekend from our

"Be the change you want to see in the world" -Gand

Inxpot will be re opening Wednesday June 10th 7 am

Come to enjoy this beautiful snowfall 😍😍😍

@inxpot Delicious, and a spicy note .... that you